A day of mixed weather conditions saw a good number of ‘Riders and Striders’ reach our little village of Brooke while our own intrepid cyclist Joan visited twelve churches on her journey; she sends thanks to her generous sponsors for helping her to raise an impressive total of £425.

The Harvest Festival at St Peter was celebrated at evensong on 17th September with the church beautifully decorated with autumn flowers and fruits. Alan Rudge took the service, the readings were done by Edward Baines and Robert Eayres and a full congregation enjoyed singing favourite harvest hymns before tucking into a splendid spread of eats and drinks. The collection as usual will go to Water Aid and many thanks must go to all who decorated the church, provided refreshments or helped in anyway. 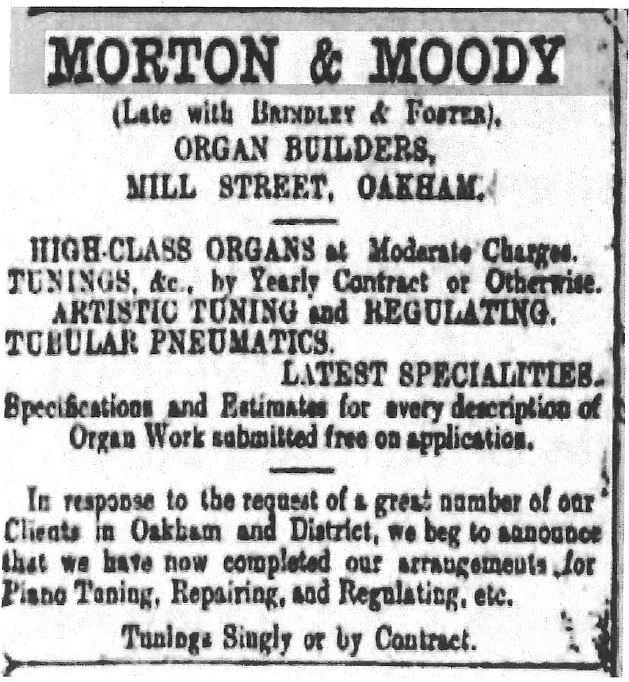 In last month’s magazine there were various references to organ recitals but I wonder if many of you knew that Oakham once had its own organ builders of some note? Sometime in 1907 two young men Thomas Morton, the son of a well known musical family of Sheffield, and William Moody, the son of a whitesmith of Hull, who both appear to have trained with Brindley and Foster, well known organ builders of Sheffield from 1854-1939, arrived in Oakham and set up their own organ building business of Morton and Moody on the west side of Mill Street next to the old fire station building. They lodged in Penn Street with widow Mary J Kettle, a costumier, and her two daughters.

The business flourished and their work was well respected; they installed their organs in various other counties and in several local churches, including Cottesmore, Uppingham and Glaston and with many other parishes contracting them for yearly tuning and maintenance of their organs.

One of their pipe organs built in 1914 was even shipped to Malaysia where it was installed in the Church of the Assumption in Penang and is still in use today. Although built in Oakham in 1914 it was only erected in the church in 1916, possibly due to shipping problems during WWI; by 1972 it had badly deteriorated but was kept going by dedicated parishioners until funds were available for its.restoration. Dismantled and shipped to England in 2013 it was restored by the Harrogate firm of Peter Woods and Sons and returned to Penang.

William Moody married a local Oakham girl, Florence Billows, in 1913, he joined the 115th (London) Field Coy, Royal Engineers in December 1915 and saw action in France and Belgium; as Lance Corporal W Moody he was tragically killed in September 1917 and is buried at Duhallow ADS Cemetery, Ypres, Belgium. (www.rutlandremembers.org) The partnership with Morton was dissolved before he went to war but Morton appears to have continued working under the same business name for several more years.

Sadly in the summer of 1915 Thomas Morton was declared bankrupt. No doubt the war years had affected his trade and the business stock and effects were sold by auction in Oakham on 21st December 1915. He married an Emma Preston in Oakham in 1921 and they one son John Anthony in 1922.