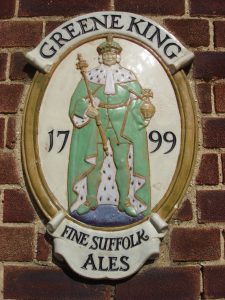 Early morning on one of the first days of proper summer this year, All Saints Friends and Mothers Union, boarded a fully loaded coach on the last day of June, and headed south eastwards to Bury St Edmunds. The list of potential goodies to see and do there was long, diverse and remarkable. This city has the WOW factor, and most of us were saying WOW intermittently the whole day. 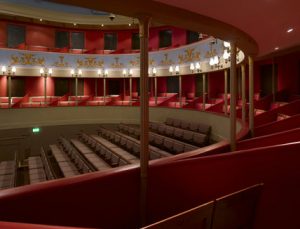 To start, we passed the Greene King Brewery, which earlier had swallowed up our local Ruddles Brewery in Langham. Fortunately we didn’t lose anyone in there as it was mid-morning, and coffee with a guided tour was on offer in the exquisite and unique Regency Playhouse, the Theatre Royal. With our National Trust membership tickets checked, we were given small group guided tours of this historic bijou working theatre, from the stalls to the gallery, to stage and underneath. WOW. 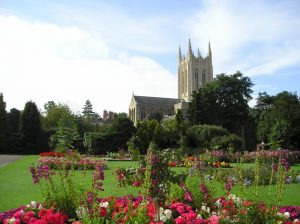 Out into the sunshine again we soaked up the atmosphere of the central part of the city and the Abbey Gate leading to the glorious extensive Abbey gardens on which originally the Abbey of St Edmund once stood. It was seriously endowed by pilgrims from all over the world from Saxon to medieval times. St Edmund was made a martyr as he was slaughtered by the invading Danes in 869. 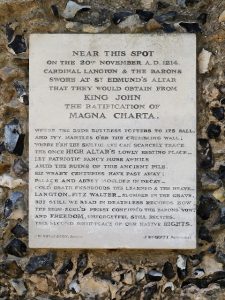 This is more than a historic city, it has made history. Legend has it that the Norman barons responsible for drafting the Magna Carta, met at the shrine of St Edmund in 1214 to swear an oath that they would force King John to accept what was in their Charter. This is commemorated in the City’s motto as being the “cradle of the law” We looked about us for a few upright and worthy Barons but sadly did not find any that afternoon. 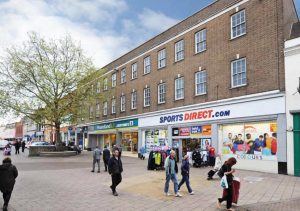 However some of us achieved some modern shopping in the thousand year old Buttermarket and Cornhill. Others enjoyed sitting in the sunshine having lunch at the top of the square near the Abbey Gate, people watching. Bliss.

Towards the middle of the afternoon, we assembled in the Chapter House restaurant within the Cloisters of the Cathedral of St Edmundsbury, a little further down the road from the Abbey Gate. A welcome and refreshing cream tea was served. More bliss. 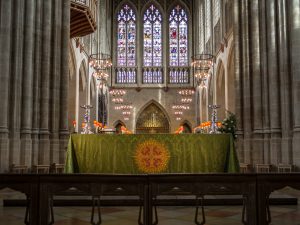 The highlight of our day nonetheless was to be a guided tour of the interesting and recently finished cathedral. It was originally a Parish Church with origins in the 12th Century, but surprisingly, a new nave, long and elegant was built in the 16th century. Much later Sir Gilbert Scott added his distinctive Victorian gothic style, with a new Chancel and interior furnishings around 1865. We walked the full length of the beautiful and elegant nave, which was lit quietly by the late afternoon sun. A moment of walking more , then a turn, into the transcept which, by total contrast, burst into a riot of colour, reds blues and gold, all light and modernity, situated underneath the new millennium, 2005, tower. Looking around and then upward, everyone gasped. WOW. 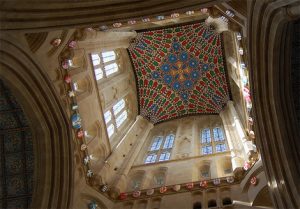 The final and crowning glory of the day as ever, was being made warmly welcome within the Sung Evensong service, and being seated in the choir stalls, underneath the beautiful and colourful roof of the tower. We may quote from a description of the Cathedral written by the present Dean,”wherever you look there is something to excite the eye and touch the soul. A shaft of light suggests hope, a bright colour offers joy, a corner of stillness offers hope.” Our day was complete. A lovely day; Thanks be to God.