On Saturday 3rd June the Rev Brian Nicholls took the service for the interment of the ashes of the late Ken Grimmer. June also saw the death of Iris Davies nee Seal of Hillside Cottage, Brooke; Iris and her parents before her had lived at Brooke for many years though after the death of her husband Dennis several years ago Iris had been well cared for in later years at Newton House, Barrowby, near Grantham. In her 80’s Iris, a woman of great character was laid to rest beside her husband in St Peter’ s churchyard on 22nd June.

On Wednesday 6th June about fifteen members of the church visiting group from the Rutland U3A were shown around St Peter by Mary Brooks.

Sadly about two weeks previously an unwanted visitor had called at St Peter and helped him/herself to a small amount of money from the box, which is emptied daily, and jams, cards and candles which are kindly made by clever parishioners and sold on behalf of the church. It would be such a shame to keep our church closed to prevent similar happenings therefore various steps are being taken to mark the items so that they cannot easily be resold.

Our patronal celebrations of evening communion on St Peter’s Day 29th June and a short afternoon concert on Sunday 2nd July may well be over by the time you receive this magazine but as usual each will be followed by the congregation enjoying drinks and food together.

The following article from the Grantham Journal of 19 th May 1923 made me wonder what the ‘Church of England Temperance Society’ would think to the congregation drinking in the church after the services. 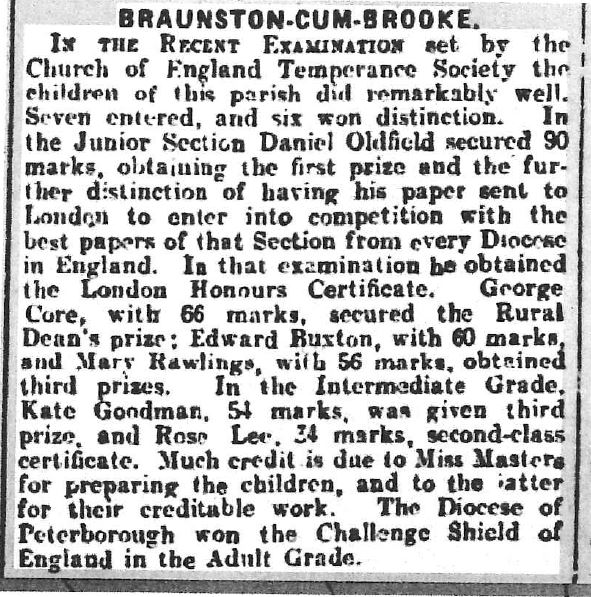 Did you know that the ‘Church of England Temperance Society’ was the forerunner of the probation service?

In the mid nineteenth century the growth of industry and commerce and easy profits saw masses of workers on low wages. Alcohol was relatively cheap and easily available leading men and women to seek solace in drink and gambling from their terrible working and living conditions; families went hungry and women and children were regularly exposed to neglect and violence. Various secular bodies had tried to address the problems with temperance or moderate living but in 1872 the C of E established a society based on religious principles the ‘Church of England Temperance Society’ or CETS, with Queen Victoria becoming the patron in 18 7 5. They advocated abstinence or moderate drinking along with education, the message being ‘Drink and Gambling Breed Sorrow’.