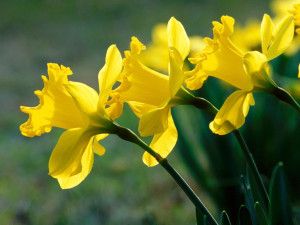 This Sunday derived its name from the verse in Paul’s letter to the Galatians, “Jerusalem, the heavenly city which is mother of us all” (Galatians 4.26) but nowadays is more associated with mothers in general. During the sixteenth century, people returned to their mother church, the main church or cathedral of the area, for a service to be held on Laetare Sunday. In the eighteenth and nineteenth Centuries, when young girls were in service, they were always allowed to go home on this day to see their mothers. The children would pick wild flowers along the way to place in the church or give to their mothers. Eventually, the religious tradition evolved into the Mothering Sunday secular tradition of giving gifts to mothers.

Mothering Sunday comes halfway through the season of Lent (the fourth Sunday of Lent) and its alternative title is ‘Refreshment Sunday’, when the rules about Lenten fasting are supposed to be relaxed, and it has been the custom to bake and eat a Simnel Cake.

There is no reason why the Christian church should not combine the ideas referred to above, together with an acknowledgment of God as mother as well as father, an idea that has increasingly gained acceptance, and appears in the Bible, as well as in the writings of the saints, such as St. Anselm, Archbishop of Canterbury in the 12th Century and Mother Julian of Norwich.

Secularly, it became an occasion for honouring the mothers of children and giving them presents. It is increasingly being called Mother’s Day, although that has always been a secular event quite different from the original Mothering Sunday, although in the UK and the Republic of Ireland, Mothering Sunday is celebrated in the same way as Mother’s Day is celebrated elsewhere.

In 2019, Mothering Sunday falls on 31 March, and services across the Oakham Team Ministry will include the distribution of flowers – the main services taking place are listed follows:

Material © The Staffordshire Seven 2006 and elsewhere.

There are no upcoming events to display at this time.